As noted in a prior post, Sam Lee was a common name for a Chinese laundry.  A small sample of Sam Lee Laundries is shown in the photograph below.  You could find one in virtually every state, but the Chinese men who operated them were not necessarily named “Sam Lee.” 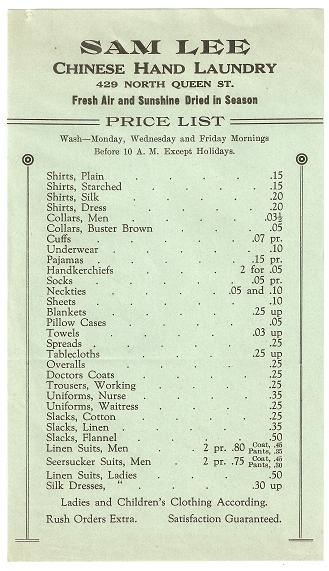 An examination of the history of one Sam Lee Laundry located for many decades in the heart of Goldsboro, North Carolina, illustrates some reasons why the name was so prevalent even though misleading with respect to the names of the owners. This Sam Lee Laundry was operated by a Chinese  known in this town as Sam Lee.  Born in Canton, China,  sometime in the 1870s,  he immigrated to the U. S. hoping to earn more here than he could in China.  Like many Chinese immigrants during this era, he first worked in elsewhere, two years in New York, before coming to Goldsboro and settled down with his laundry for around 60 years, according to him. However, there is no record of the exact year he came to Goldsboro but he did stay there until he closed his laundry in 1960.

Although the 1911-12 Goldsboro City Directory listed a “Sam Lee Laundry” at 138 East Center South, the U. S. census did not list a “Sam Lee” living in Goldsboro in either the 1910 or 1920 Census. This absence does not prove that he was not there, only that he was not available when the census enumerator came to his address. The 1910 U. S. Census did list a different Chinese, 28-year old Sing Lee, operating a laundry with a 17 year old cousin Joseph Lee at 218 East Center South, an address  very close to the 1911-12 location for the aforementioned Sam Lee Laundry.  Although it might seem that  these were two different Chinese, each operating his own laundry, it is possible that there was only a single laundry and it was operated by the same Chinese man.  Census enumerators may have made an error in recording the address. Another possibility is that the two different  numbers of the two laundries on the same street reflected renumbering of street address numbers that occurred in some towns as they grew.  Another conjecture is that the 28- year old Sing Lee might actually have been the same man known as Sam Lee who was the same approximate age. Perhaps when the Chinese man spoke his name, with imperfect English pronunciation, for the census enumerator in 1910, it might have been that “Sam Lee” was heard as “Sing Lee.”

In Chinese,  “Sam Lee” is not a person’s name but a concept that translates to mean “three (triple) profits,” 三利, a name that might be chosen for a laundry business in hopes that the name would magically bestow good fortune.  However, many people assumed that a Chinese operating a “Sam Lee Laundry” must be someone named Sam Lee.  For such reasons, it is conceivable  that his real name was not Sam Lee. The Chinese character for Lee as a surname is  李 , which differs from the Chinese character for profit, 利, even though they have a similar pronunciation.

Many years later, when  Sam Lee was asked to write his name in Chinese for a newspaper article, he did not use the character for the surname Lee 李 but instead he wrote the  characters for triple profits,  三利, although the newspaper, unfamiliar with Chinese, printed his name upside down. 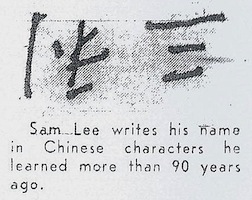 The first City Directory for Goldsboro, published for 1916-17, followed the fashion at that time and used the heading “Chinese Laundries,” to distinguish them from the white-owned steam laundries. It  listed two Chinese laundries, one run by Charles Lee at 130 south Center East and another one run by Sam Lee at 137 south Center West. The street number differed by a single digit from the location, 138, given for Sam Lee Laundry in the 1911-12 Directory, so it is reasonable to assume it might actually be the same laundry.

Sam Lee, finally turned up in the U. S. Census lists for Goldsboro for both 1930 and 1940. The 1930 Census recorded Sam Lee as 51 years old and married.  However, there was no listing of a wife or children for Sam Lee in either the 1930 or 1940 Census.  It is likely that, like many other Chinese, he was unable to bring any family members because the Chinese Exclusion Act of 1882 did not permit laborers like him to do so. Although this law was repealed in 1943,  difficulties persisted for many years for Chinese trying to bring family members over.  On Nov. 26, 1951 a Greensboro Daily News article about Sam Lee when he was 71 years old is consistent with this conjecture. It cites his inability to bring his family to the United States, a situation that was aggravated by the rise of the Chinese Communist government around the early 1950s. Even though he had already sent his family $500, the most he could raise, he was still unsuccessful. He received a letter from his wife that pleaded, “Send for me. I don’t pay fine. I put to death.”

According to the 1930 Census, Sam Lee had a Chinese roomer, Lee Joe, age 37.  The Census enumerator probably reversed his name, because as noted previously, in 1910, a 17-year old cousin, Joseph Lee, was listed with Sing Lee at his laundry.  Lee Joe and Joseph Lee were probably the same person. This evidence fits the conjecture that Sing Lee and Sam Lee might have been the same person since it is highly unlikely that two different Chinese laundrymen of about the same age would each have a roomer named Lee Joe (Joseph Lee).  Interestingly, Joe Lee or Lee Joe, worked for a different laundry in between his time in 1910 with Sing Lee and in 1930 with Sam Lee for in the 1920 Census he was listed as a 28-year old servant for a laundryman, Kai Hong,  at 127 James St.  His moves may have reflected the ups and downs of the laundry business for by 1930 Sam Lee Laundry moved to 205 N. Center St. which was also its address  in the 1940 census.

Almost 20 years later, on June 1, 1969, the Goldsboro News-Argus newspaper published a heart-wrenching story about Sam Lee (then 89 years old, but described incorrectly as 98 years old). He had operated his laundry for over 50 years until he closed it in 1960, unable to compete against large steam laundries.  Without work, he struggled to survive on social security and welfare, unable to even afford glasses or a hearing aid for his declining vision and hearing.  Fortunately, a former laundry employee of about 46 years provided him with housing by taking him into her home.

The story involved a little white girl who received a pair of small chopsticks from her father serving in the American Air Force in Vietnam who had sought Sam Lee to teach her how to use them. Sam Lee made a gift to her of a larger pair of chopsticks, ones  he had brought with him when he first came from China.  As news of this kind gesture  spread, people in the community reached out to provide Sam Lee with glasses, a hearing aid, food, and even money.

Sam Lee’s life was similar in many respects to that of hundreds of other Chinese laundrymen, especially those who lived and worked in isolation from other Chinese, often separated from their wives, children, parents, and other family. The more fortunate ones may have had brothers, cousins, and even sons who managed to circumvent the immigration barriers to join them in operating their laundries.

Sam Lee died in Goldsboro in 1978. Death records for North Carolina reported Sam Lee as born in 1877 and dying in Goldsboro at age 100 in 1978, although a local newspaper obituary reported his age as 107.

The Index of North Carolina Deaths, 1931-1994, indicated he is buried in Willow Dale Cemetery, Goldsboro, N. C., but a check of that Cemetery’s records does not confirm this claim.

A retired university professor of psychology, I am researching, writing, and speaking about aspects of Chinese American history related to the family-run businesses such as laundries, restaurants, and grocery stores that so many early immigrants operated to survive because racial discrimination excluded them from most other occupations. My interest originally stemmed from growing up and helping with work in my parents' Sam Lee Laundry in Macon, Georgia, where we were the only Chinese in the whole city from the late 1920s to the 1950s. View more posts